Would You Rather Be A Hammer Or A Nail? 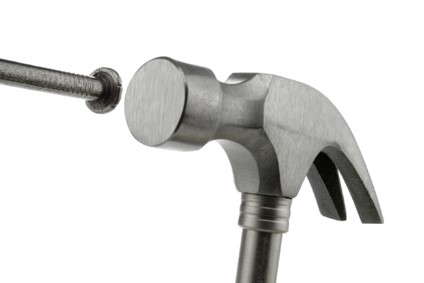 Life is a Business – Chapter 35

When I started out in manufacturing as a young man in his mid-twenties, an older engineer that mentored me spoke a profound truth for the ages:

“95% of all the workers tighten a bolt into a hole…3% tell them which bolt to put in which hole and how much to tighten…only 2% know why the darn thing’s there!”

The first question is “where are you on this list?” The second is: “where do you want or need to be?” There is a much bigger issue if you don’t understand why these questions matter! Each and every one of us has a place in this world, doing that which we have the aptitude, skill sets and emotional capacity to succeed. Let’s be honest-not everybody is given the gift of being a natural salesperson, or good with numbers, or great with physical dexterity or feats of strength. It’s O.K. that we are different…that’s why there are different jobs and tasks in life. Some people seem destined to lead from early childhood; it shows up on the playground, then, it accelerates in high school and later, the military, a first job, or college. You know in your heart if you would be voted the foreman, if selected for jury duty. You would also know if you would never be that person out in front of a group…it’s just your nature.

“Lead, Follow, or get out of the way…” is how I see my world each day, without fail. I always believed that I had a destiny to lead people, but obligation to lead them in a manner that was noble and good for all of us; to lead them with dignity and fairness to all persons who would follow with good heart, good cheer and a willingness to become something more than they are today, for the good of the order. I believe collaborative, servant leadership is the key to building organizations/teams that can endure unbelievable hardships and overcome daunting obstacles to success. If the troops see the leader leading the charge and risking it all for the group, then they will follow him/her into the Gates of Hell and back, gladly. This sense of a mission-not a task, is the kernel from which great leaders, entrepreneurs and team players come from. Read my lips – There are no great leaders without great followers.

Decide what type of peg you are at heart and find the hole that fits you; find that place in life and business where your basic nature is an asset, not a liability. My Father was a master furniture maker, a man who could make works of art out of pieces of raw, rough wood. He viewed his sons as two such planks of tough black walnut that had to be dried, planed, shaped, glued, sanded and lacquered to a fine finish for the world to see and marvel at his handiwork. We did not turn out perfect, but did OK. Now, we will both tell you that the sanding was a little rough, but Dad accomplished his goal in life, even though he was never financially successful. His mission all along was just finishing us. He often said: “I’ll never cross the river Jordan, but my two sons will…” At ages 63 & 65, we are still paddling hard to live up to Dad’s expectations as warriors vs. Mom’s focus on raising gentlemen…I’ve been told several times that Dad won, but in the words of Merle Haggard: “Momma tried!”

If you choose to be a hammer, be a loving, gentle hammer that firmly drives the nail without damaging the wood…both the nail and the wood will appreciate it!