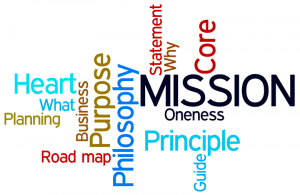 Life is a Business – Chapter 8

Most of the mission statements I have read over the years are tortured, plastic slogans, more for marketing than real meaning. They all tend to sound out the same general platitudes in every consultant’s PR manual like synergy, excellence, empowerment, quality, blah, blah, blah. Everyone believes the same thing! Why are two organizations with identical mission statements so different? Either one lied, or one did not believe in what they wrote down, or someone did not tell the team what the mission was, how we are going to get it done and why it matters. Maybe, the great company actually had a higher mission at the core of their collective souls that was not the one the committee selected. The best mission statement is the simplest i.e., Sam Walton and Walmart: “I want working folks to have nice stuff like rich folks do…”.  Says it all doesn’t it-without bells and whistles. You know exactly where his focus was and we all know how he did it as he changed the face of retailing for a period of time. I say a period of time, for new channels are evolving like Amazon and a multitude of new technology driven on line merchants. If you had to live or die with a mission statement that would fit into a Twitter post, what would you say? Try it yourself, it’s a lot harder than you think!

Whether you are a young person, just starting out or a senior citizen like me reflecting on life, you should have a mission you truly believe in, heart and soul. Do you have any doubt how that passion and commitment from age 3 led to Tiger Woods becoming the greatest golfer in history? Do you think he knew his mission? The only thing to derail him was that he was totally imbalanced in life and did not have a grounded sense of humanity as relates to others; his father placed him in an isolation bubble separate from the rules of normal society. I don’t blame Tiger as much as I do his father. He seems to be “unlearning and relearning” doesn’t he? How much more pleasant would his life be if he had had an epiphany prior to getting whipped by his wife with a 2 iron?

Some years ago, while trying to save a 100 years old company from bankruptcy, we could not get across the void without major changes in behavior and the culture. A consultant quoted: “Change always comes from without, not within…”

Our nature is to get comfortable in familiar surroundings, even if in a trash dump. Something has to make us change by arousing a want, need, desire or causing enough fear, pain and suffering to make us move. Successful people see the opportunity to change for the better long before they have no choice. There’s a big life concept- Choice!

Open a bottle of good wine, get settled in and let’s talk about the choices we made in life…nah, it hurts too much…like Scarlett O’Hara, “I’ll think about that tomorrow…”