What Have You Been Doing Since September 2008? 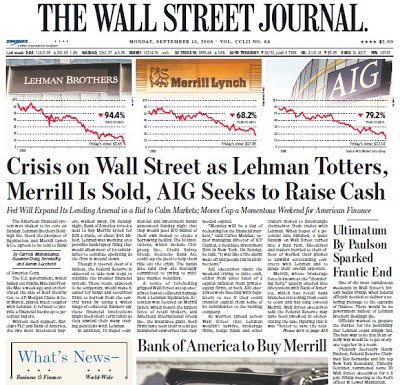 Life is a Business – Chapter 4

Would it sound illogical to you if I told you that the Great Recession of 2008, the worst economic collapse since 1929 actually helped us succeed? This country was within weeks of a situation that would make the Great Depression look like a picnic in comparison…it’s one of the first times my college education allowed me to see behind the curtain we all trust to protect us…we don’t like seeing the sausage made, but sure enjoy the breakfast!

From my perspective, Wall Street firms, banks and equity funds manipulated Congress to turn them loose once more to become river boat gamblers…but with our money, not theirs. Credit default swaps and derivatives are nothing more than proposition bets like you would make on Super Bowl Sunday at Caesars Palace in Las Vegas. Over/under, how many TD passes, point spread, or even the coin toss- neither party has a vested interest in the deal, it’s just betting on the come.True hedging is a valid tool to protect against catastrophic loss or cost increases on commodities vital to a business during a period of time when prices on the product may not be raised due to contractual agreements. Back in the 1990’s, everybody’s IRA’s were growing at 25-35% per year and taxi cab drivers and newsstand guys were giving day trading stock tips. The phone lines were hot with stockbrokers letting you in on the newest racehorse deal. There was talk of a $20,000+ DOW coming without fail, soon.

Once again, there was that pesky “the fact is…”. One quiet evening, the hair on the back of my neck wiggled and it hit me- 10-12% annual return is the average of the stock market over many decades and we had been running three times that high for years…what has to happen to get back to average? Do you know the answer? If the average is 5 and you have five 15’s, what are the next five numbers to get back to 5?  If you took statistics in college, you know that everything in the universe has a bell curve that will hold true given enough events (this is how Las Vegas takes your money). I took all my aggressive IRA’s and went to money market three months before the severe decline that happened around 2001.

Immediately after the 2008 crash, Warren Buffett started making deals to buy stock, lend cash with stock warrants and buy derivatives (bets on conditions over time) for one simple reason: he had cash when the crash came and the odds for the reverse statistical swing in a short period of time just happened. He has made untold BILLIONS and he told us how we could have gotten our little share too, if we were not so scared: Warren said “When people are greedy, get scared…when they are scared, get greedy…” Blood in the street was just free sausage for him!

When I was in my 20’s, a smart man told me that for a poor boy to get rich, he had to go where money was changing hands among the giants above and figure out how to jump up and grab it a little at a time until he grew into their size. If money is put away, buried in fruit jars never to be risked, we poor kids never get in the capital game. Ah, capital, capital, capital…starting with nothing, how do you get it? I know how-you hustle night and day making whatever you can legally and “SAVE” it until you have enough to invest in something that goes up in value-not down. Your house, land, a rental house, a car to repair and sell are the best place to start because your “sweat equity” brings real cash return if you are smart. When you are young, you have lots of time and energy, but little money…when you are older; you usually have money, but are almost out of time and energy. The secret is “The Time Value of Money”. This is why the banks and insurance companies have all the money-we hand it to them to hold and give back to us decades later, usually less after inflation…they invested it for all those years and pocketed the gains themselves-is America great, or what?

If you have stayed on the sidelines watching the world go by since either 9/11/2001, or September 2008, you have missed the greatest opportunity to gain capital in American history. Change and volatility is your friend as a newcomer to the game, not your enemy.

When we started Metalworking Solutions in 2007, many companies shut the door to us, for they were quite satisfied with their current suppliers. Everyone was fat, dumb and happy! Our business did not start to really gain traction until the Crash made all corporations question costs, service, quality and reliability of all vendors. Some started failing and our phone rang in direct proportion to the fear of failure. We expanded during the Great Recession in anticipation of opportunity. Sometimes, you must gather your courage and take a calculated risk. I don’t enjoy gambling, but have no fear signing a note for a $1,000,000 new laser…I know my odds, like Warren Buffett.

Find your good odds and take a chance on yourself. As my Father always said: