If You Are Scared Buy A Bulldog 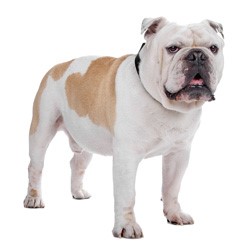 Life is a Business – Chapter 36

One day, some years ago, I was standing on a tee box, staring at a long golf shot across a body of water. My brother John gave me a few seconds to ponder all the negatives, then tapped me on the shoulder and said: “If you’re scared, buy a bulldog.”  I laughed, then, hit the ball over the water without worrying about the hazards. I have remembered this and used it many times in business since that day and found it to be a great mental image/trick to reset your thought patterns.

It fit in with the advice an old sales trainer gave me on my first sales job at Pitney Bowes as I struggled with making cold calls-he said: “What’s the worst they can do to you? They are not going to boil you and eat you, are they?”  Once I realized that the worst they could do is say “No”, it became easy to walk in and present my company as a solution to their needs. I realized that the only man I had ever feared was my Father; I had sworn as I left home at 18, that no man would ever whip me again…and they haven’t. I could go all around the world and sit in the offices of the corporate elite and win more times than not…because I had no fear. Their fears of failure in their organizations opened the door for me to get their company’s money in exchange for making them look smart for bringing me in to execute merchandising programs. I gave great value to their companies and to them as individuals-nobody did anything that was not a good decision. I would tell them if my company was not the right choice-they would always call me back on future projects because they respected my integrity and trusted me to steer them in a good direction.

Selling is not getting someone to do something that they really should not do-it is all about earning the right to win all the “ties” and most of the close calls. A slight shift in odds is all you need to be successful. Overcoming the fears you harbor is critical to developing a winning strategy and being able to execute consistently under pressure. My old alma mater, South Pittsburg High School, won hundreds of football games they should not have won, simply due to the fact that we expected to win and opponents expected to lose…the game was over before the coin toss- the point spread was the only question remaining.

We are part of Nature; we have animal instincts; your fear is visible & it has a smell. The wolves across the table can sense it and will devour you when weakness is revealed. If you are desperate for a deal/order, you usually can’t buy one…if you act like you don’t need it, you can get them easily. All salespeople have experienced this phenomenon. I worked for years to mentally keep myself from sweating during tense presentations / negotiations…yes, you can do it & it works! If you don’t believe me, watch the pros on TV play poker and give “no tells” to their opponents.

Reading body language and unspoken physiological signals are like having the other team’s playbook and signal codes in your hands…or your opponent’s!