A College Degree Is A Temporary Bus Ticket 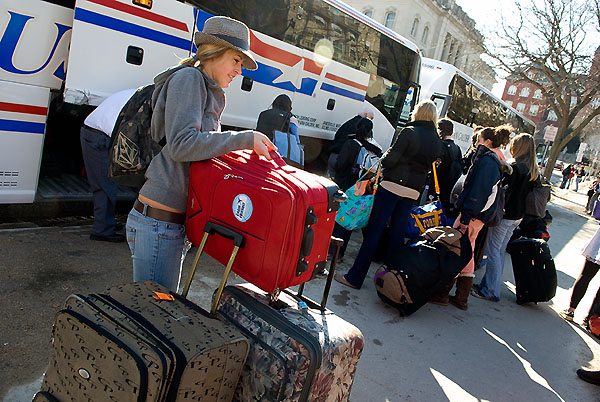 Life is a Business – Chapter 44

UTC Business College has a Success Seminar each semester for graduating seniors, the purpose of which is to point them in the right career directions. Starting last fall, I was asked to speak on behalf of the “real world” business community and the topic was: “Why you must never stop learning”, probably the most important characteristic of successful people throughout history. In preparing for that 15 minutes, I rediscovered the fact that my degree from Tennessee declared me fully educated, even though we were still using punch cards to program computers, hand held calculators were rare, typewriters were still mostly manual, fax machines were non-existent, there were no cellular phones, no Internet, no iPods, iPhones, iPads…no “iAnything”.  Heck, it was three years until Microsoft was founded and four until Steve Jobs even started Apple! A high tech, high fashion communication device in 1973 was a pink Princess rotary dial phone (mobile up to the length of the cord so a girl could hide in the closet to talk to her boyfriend in private).

The rules of the world were drastically changed within a few years of our graduation.  Technology exploded at the same time OPEC tripled the price of oil and gasoline was rationed. Banks were charging up to 21% interest rates and the goal line for success was quickly moved another mile away for most of us. Our entire personal life plan got swept away in unforeseen change. Some young people gave up and “dropped out” to live the bohemian hippie lifestyle, while others like me, grit our teeth and adapted to the new rules of the game to fight our way through the mess we were handed by our predecessors. Remember our topic some weeks back: “Life is not fair… so what”?  Each time you see a bird, just know that that is a dinosaur that refused to allow an “unfair” environment lead to its extinction…its ancestors learned to adapt and change with the circumstances. We must all play the hand we are dealt, not the hand we wish we had.

What can you tell young graduates in only 15-20 minutes that will impact their lives and careers? Colleges and universities have four years with them and many emerge with great amounts of memorized facts and figures, but a shortage of critical thinking ability and mental toughness. Our education system from beginning to end is built upon standardized texts and testing, but immediately upon graduation, nothing is standard…ever again! It’s been 42 years since anyone asked me to take a written test; imagine handing one out on card playing theory to the players who just paid $10,000 for a seat in the World Series of Poker. What they know in theory matters nothing at this point. All that matters now is: “Can you win?” The ultimate winners always have both courage and luck, but most of all, they have the uncanny ability to read others and know when to take calculated risks that often turn a losing hand into a winner.  These are the identical traits of successful business people in all industries.

This simple idea led me to see what I will take to the next session with the students in April – my old college degree from the attic and the ticket stub from UT’s recent bowl game that I was fortunate to attend a few weeks ago. These two pieces of paper are similar in nature – the ticket to the bowl game was immediately worthless, where my diploma became less and less important with each passing year of experience and personal achievements in business.  Both of these expensive documents have diminishing value, once utilized for their primary purpose…getting you into the game. Once you are through the gate and inside the stadium, you can go sit in your assigned seat, or brazenly try to take those empty seats at midfield, until someone makes you move. If you act confidently, very few people will challenge you except the true seat owners, even if they know you are a squatter.

A college degree is simply a temporary pass to sit in the front half of the bus headed to the “Economic Disneyland”… but only for the first part of the trip.

Let’s set the equation for simplicity:

Just as the expensive ticket to the Tax Slayer Bowl was worthless once I got into the game, so to a lesser extent was the importance of my hard earned college degree with each passing year of experience. Your degree vouches for your intelligence, willingness to learn, your work ethic and steadfast dedication to completing a task and reaching your goals. It says you are now ready and able to learn. Working full time and going to college full time for four years was just the price I had to pay to get on the bus. I knew if I could just get on it, I would win enough of the games and challenges to at least make it to the top 2%…somehow, some way. I figured out that to be in the top 2% at the end of the trip, I better stay in the top 2% of my age bracket all the way to the end of the ride. I was put off the bus a few times, but got back on a little smarter each time. I can tell you that running to catch the bus at 55 years old, one more time, was Hell on this old man, but has been the most satisfying leap of all…I knew how to play the game this time.

Getting on the bus is no guarantee of staying on the bus. You must earn a seat each day, unless someone in your family long ago bought a lifetime pass for you.

I would still want to prove to myself that I could have made it on my own.